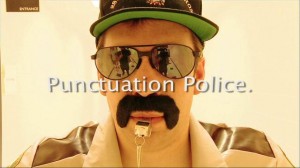 Whether I’m providing script notes or I’m proofreading scripts, I often find instances where the writer has used three dots (…) where she should have used two dashes (–), or vice versa.

Three dots (an ellipsis) at the end of a sentence are used to indicate that a speaker has trailed off. For example:

But if my fingerprints are on the knife, then that means...

Jacqueline stares at her hands, the realization sinking in.

Two dashes (technically hyphens) at the end of a sentence are used to indicate that a speaker has been interrupted. For example:

Follow me to the kitchen. I want to show you my new knife collec--

I made cinnamon buns.

If I didn’t want to write a partial word, then this rearranged sentence could work: “I have a new knife collection I want to show–”

Notice how there’s no space between the double dashes and the last word being interrupted? I feel it gives a better sense of an interruption that way.

A Note About Single Hyphens

Some screenwriters (including some pros) use single hyphens to indicate an interruption or a pause. I guess the idea is that the single hyphen takes the place of a longer em dash (—) that you would normally see in anything written with a proportional font instead of a fixed-width font like Courier — basically anything other than a script.

Having said that, give me a script where the writing is otherwise fantastic, and I won’t even notice the issue.