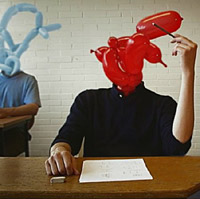 Are you a sloppy writer?

Of all the common, lazy mistakes I encounter when reading scripts, the one that possibly irks me the most can be found in the following dialogue exchange.

Look, I ain’t playin’ with you. Give me the money, or you gonna get got!

I really should of stayed at a nicer motel.

Do you see it?

“ain’t”? — No, that’s a legitimate word. Merriam-Webster tells me so.

“playin'”? — Nah, that’s simply eliding a letter to give a better sense of the how the character speaks.

“you gonna get got”? — Nope. As grammatically offending as that slang is, it’s appropriate for the character.

So what is it?

Do you see it?

No? Then you may be a sloppy writer.

The phrasing is either “should have” or “should’ve.” It may sound like “should of,” but sounding like something doesn’t count.

It’s like that time I wanted to tell someone off in my yearbook graduating entry, but didn’t want to have it flagged. So I wrote “FUH Q” instead of, well, you know. (True story. Yeah, real classy.)

Sounding like something, and being the equivalent of something, are two totally different things.

But what about intentional misspellings to give characters a certain affected manner of speech?

Intentional misspellings and grammar faux pas are permitted in screenplay dialogue blocks, as long as it’s clear to the reader that the mistakes are indeed intentional (e.g., slang, speech impediment).

It’s like how I wrote, “real classy” above, instead of the grammatically correct, “really classy.” In a casual blog post, or a script dialogue block, that’s just fine. It’s being cheeky and using the common phrasing.

However, spelling it: “reel classy” would be a mistake. The audience can’t see or hear the misspelling, so it can’t be justified by saying, “But that’s how my character would have spelled it!”

Bottom line is, if you’re one of those who missed the mistake above, you may be making others in your script that you’re not even aware are mistakes.

So if you need proofreading or script notes, I’m here for you.