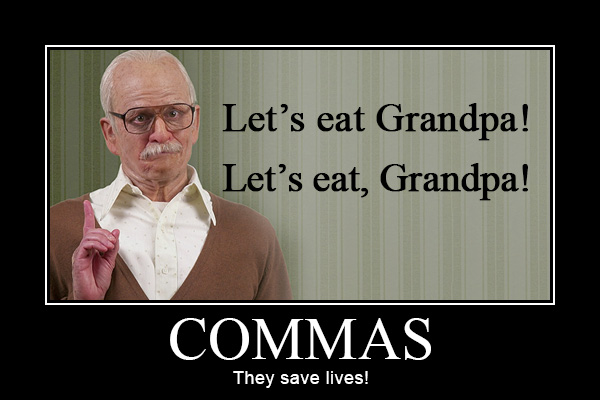 Commas are great. I’m a fan.

Without them, misunderstandings abound…

But why are so many commas turning up in scene headings these days? Did I miss the memo?

Let’s clarify what I’m talking about. It’s the use of commas in place of hyphens for separating location elements in scene headings. For example:

One of my friends sent me his script recently. He’s a pro and one of my favorite screenwriters. When I saw he had used commas in his scene headings, my brain partially exploded.

I’m going to tell you guys what I told him. It’s a bad idea.

Despite its growing popularity, it’s still a non-standard way to format scene headings. Non-standard formatting = red flag. Too many red flags and your reader may form a less than positive opinion of you or your script.

I’ve never seen a recognized script formatting guide that says it’s acceptable to use commas in place of hyphens. Have you? In my opinion, this isn’t a new, trendy technique — it’s an old mistake that’s making a resurgence.

Whenever I see a comma in a scene heading, my read slows down.

Why? I now have to stop to think about the intention behind the formatting.

In a master scene heading, that uses conventional formatting, the locations go from general to specific. So, in the example above, the correct way to format the scene heading would be as follows:

The problem with commas is that I find approximately 50% of people who use them tend to reverse the natural order. They go from specific, to general. For example:

In the example above it’s easy to comprehend that the JUBILANCE MENTAL HOSPITAL is the general location and the PADDED ROOM is the specific location. But what if you have something like this?

Uhhhh… Is the gun stand like a small rack of guns that’s inside the dark room? Or is the stand like a large booth, with a dark room in the back?

Using a hyphen instead of a comma, and the general to specific rule throughout, would clarify things.

What if, God forbid, you add a third location? Sometimes I see things like this:

If you have to use a third location (and odds are you don’t), then just go from general to specific to avoid confusion:

If there were things happening in different padded rooms on different floors, you’d probably still be better off with a shorter, single location:

Try to keep scene headings as short as possible… but not shorter.

But if some pros do it…

Let’s be honest, when you reach that magical stage in your career where important people are asking to read your scripts, formatting doesn’t really matter.

But until then, why take the chance? Is your love for the way scene heading commas look really worth making the experience of reading your script more challenging?

What are your thoughts on commas in scene headings?