Are You Overusing LATER? 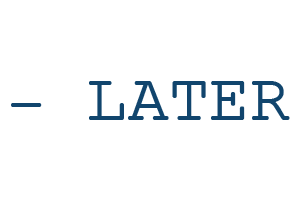 After reading a few client scripts recently where LATER is actually used more often than DAY or NIGHT in scene headings, I figured it was time to address this issue.

If you’re fond of using LATER in your scene headings, then what I’m about to tell you might blow your mind…

Unless you’re dealing with a flashback, it’s already understood that EVERY subsequent scene in your script takes place later than the one that preceded it.

So expressly telling the reader that your scene takes place LATER is unnecessary… most of the time.

When should you use LATER?

As far as I’m concerned, there’s really only one legitimate use of LATER:

When you’re indicating that we’ve jumped ahead in time, in the SAME scene location.

Let’s take a look at the standard, recommended usage. Say you’ve established a scene heading with some description. For example:

The Brooksville Killer paces back and forth, eyeing the steel bars. A rabid animal in a cage.

Now, suppose you want to jump to a moment that comes later in that same location. There are two methods you could use. 1) Write a new master scene heading:

… and then write some action lines.

What you do NOT want to do is use LATER if your following scene takes place in a new location. Example:

There’s no reason to write LATER for the scene heading above. It’s not like the reader is going to get confused and think your character is somehow simultaneously in his cell and in the prison yard. Obviously, he’s moved from one location to the next over some unspecified time.

So you would simply use DAY (or NIGHT as the case may be) for the new location scene heading and then add your action lines:

The maniac hammers his fists against the concrete wall, over and over again.

Bits of the aged wall crumble in his hands... and an idea sparks in his eyes. 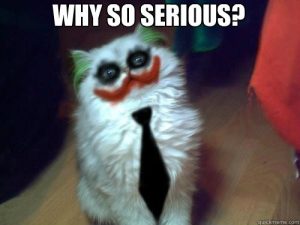 Why so serious? What’s the big deal?

There’s technically nothing wrong with writing LATER in subsequent scene headings. The problem is if it goes on for too long, it can confuse your reader.

If you keep writing LATER in your scene headings, eventually I’m going to forget whether it was day or night, or wonder if it has since transitioned from one time to the other. You’ve now made it more difficult for me to visualize the scenes.

When you make your reader struggle, that’s a bad thing.

Josephine and Tommy share a hot dog, each nibbling from opposite sides of the bun.

The lovers share a tropical drink... sipping from straws... gazing into each other’s eyes. If they weren’t so adorable, it would be cringeworthy.

The description is fine, but am I supposed to picture a brightly lit daytime patio or an atmospheric nighttime patio? The LATER throws me off.

One of the key jobs of a screenwriter is to set the scene for the reader. Do yourself a favor and use DAY or NIGHT in your subsequent scene headings to help you with that task.

What about  MOMENTS LATER?

Typically, MOMENTS LATER is used like LATER — when you want to indicate a jump in time within the same scene location. However, in cases where the location has changed, and the context of the scene is such that the reader might incorrectly think the scene takes place long after the previous one (when it really takes place shortly after), it’s just fine to use MOMENTS LATER for clarity.

Here’s an example of it NOT being necessary:

Brandon flexes his muscles in a mirror as Lisa sidles up to him.

My uncle’s on his way. I told him how you cheated on me, and he said he wanted to... uh, talk to you.

Brandon bursts out the front entrance in a full sprint. Races to his car as fast as his cowardly legs will carry him.

It’s not necessary to use MOMENTS LATER in the above example, because the context of the scene already tells us that it takes place moments after the previous scene.

But if you come across a situation that isn’t so clear cut, and it’s important to know that the scene takes place shortly after the previous one, using MOMENTS LATER instead of DAY/NIGHT will help to avoid any confusion. Take the following example:

Little Jimmy sits alone in his room, sulking. He stares at the Einstein poster on his closed door.

I loathe all of you imbeciles. I shall never leave this room! Ever!

A warm voice calls from downstairs:

Jimmy, the cupcakes are ready.

Jimmy cracks open his door. Peeks into the hallway. Breathes in the intoxicating aroma of chocolate and frosting. Sighs.

The flesh is weak.

Using MOMENTS LATER in the above example helps to reinforce the timeline. If NIGHT were used instead, the joke of how quickly Jimmy caves may not be as clear.

Are you a LATER overuser?