Reader Question: One Or Two Line Spaces Before Scene Headings? 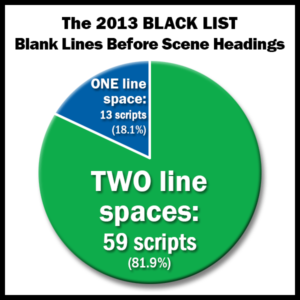 Final Draft allows you to manually adjust to either ONE or TWO spaces between each scene.

Does it really matter?

Increasing from one to two lines adds about a page per 120 pages script, so does it really impact timing, or is it used because it is merely easier to read?

I don’t want to give producers any reason to throw out my script!

First, no legitimate producer is going to throw out your script simply because you used one line space versus two between scene headings.

Second, it doesn’t impact timing at all. It’s just recommended because it’s easier to read, and readers (i.e. gatekeepers) appreciate it more at a glance.

But ultimately, if you’re trying to hit a specific page count, and you just can’t whittle your script down any more, it’s not that big a deal to use single line spacing between scene headings.

The only caveat is that you shouldn’t attempt this with producers or managers who have already seen your script and have asked you to reduce the page count. They’ll spot the single line spacing trick from a mile away.

So if you have a script that’s very heavy on scene description (action lines) and has limited dialogue, I’d say definitely use two line spaces before scene headings. But otherwise, it’s not a requirement; it’s just one small, additional way you can appeal to a reader when they initially fan through your script to get a sense of its density.

But of course, solid, engaging writing trumps everything.