Are You Punctuating Acronyms And Initials Correctly In Dialogue? 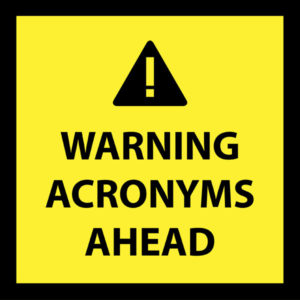 There are tons of “rules” in screenwriting that take a long time to figure out. Many of these so-called rules are shibboleths or leftovers from a bygone era that are handy at weeding out the amateurs from the pros.

However, most of the standards we see in screenwriting exist for a good reason. They allow for comprehension and clarity. Such is the case of using periods correctly with acronyms and initials in dialogue.

When writing dialogue in a script, use periods if each individual letter is to be spoken by the actor.

It’s especially important to use periods for acronyms like I.D. (abbreviation for identification) and L.A., because “id” and “la” are both actual words with completely different meanings.

TV — on the other hand — is pretty unmistakable as the abbreviation for television. However, I’d still recommend writing it as “T.V.” in dialogue because it will be consistent with how you write other abbreviations or acronyms that are to be spelled out, and it makes for an easier read.

Because there are other acronyms that you would not use periods with in dialogue — even though as organizations, etc., they may be officially recognized with periods in their names.

I’m talking about acronyms like MADD (Mothers Against Drunk Driving), S.W.A.T. (Special Weapons and Tactics), etc. They are NOT pronounced by spelling out each letter.

So in dialogue, we write: SWAT, but in action lines, we write: S.W.A.T. — because that’s how it’s normally written. Dialogue writing is a special beast with special rules.

Acronyms like AWOL and MADD are written the same regardless of where they’re being used, because they’re both not spelled out and are officially written without periods.

Remember, in dialogue write it like your actors should say it.

In dialogue, how should you write…?

If you follow these simple rules, you can also get away with capitalizing words for emphasis (sparingly) without actors having to stop and think about whether or not you’re suggesting the word is an acronym and should be spelled out.

Luckily, these are all things I flag when I proofread your script. Any other dialogue peculiarities trip you up?