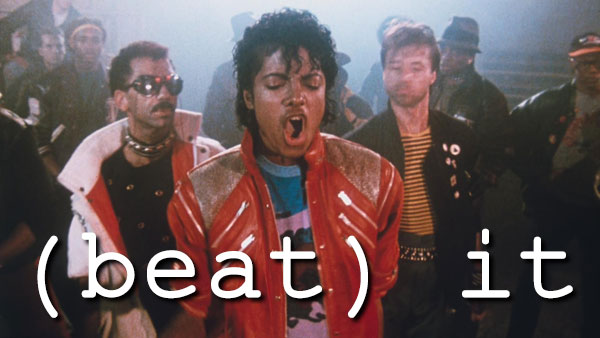 Sometimes you need your actors to pause in your script. One of the common ways to convey this action… or rather, inaction, is to use the word “beat.”

3. At the beginning of a dialogue block

Some writers unnecessarily use a parenthetical beat at the beginning of a dialogue block to convey a pause. For example:

It’s one thing to give an actor a specific direction as to how to say a line, especially when it’s not obvious. But it’s another thing entirely to simply instruct an actor to pause before saying their line. It’s the actor’s job to interpret the scene and give the moment the correct authenticity it deserves. That includes leaving dramatic pauses when appropriate. Actors are finely tuned to these types of moments.

So stay in your lane, bro. Let the actors do their thing and leave it up to the director to give them notes on their performance and pacing if needed.

2. In the middle of a long dialogue block

Sometimes writers will use “(beat)” to break up a long dialogue block. The instinct is right — dialogue blocks that are too thick with text can turnoff readers and are often associated with amateur writing. But simply throwing a “(beat)” in there to break things up is a bad idea.

For example, let’s look at the following dialogue block:

As written, the “(beat)” breaks up the dialogue block, but it doesn’t tell us anything about the line delivery. Instead of using “beat,” see if there’s some other more insightful parenthetical that can be used. Whatever word you use, we’ll know there’s intended to be a pause there.

That’s now much more instructive to the actor. It also gives us, the reader, more insight into how the line is said and the true meaning behind the pause. What did she find in the shed?

1. All by itself on an action line

The number one way to misuse “beat” is to put it all by its lonesome on an action line.

It’s effectively a combination of problems one and two. You’re telling an actor when to say their line and you’re not giving us any insight into the reason for the pause.

What if instead of using “BEAT,” the writer spells out the action and emotion of the moment? They might as well go for it if they’ve already decided to use up the precious script space of a separate paragraph.

Much better, right? Gives much greater context and visuals to the moment. Bottom line — there’s almost always something better to use than just “beat.”