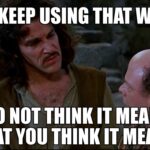 First, what are they?

Parentheticals, or actor/character directions, or “wrylies,” are those little descriptions that sometimes appear after a character’s name, in dialogue blocks, to spell out tone, intent or action.

In the poorly written example below (see Rule #1), the parentheticals are “(breathlessly)” and “(confused)”:

The Loyal Squire bursts through the door. Collapses on the ground. Pulls a bloodied envelope from his pocket.

I may not live... to see tomorrow my liege... But I die knowing... that I have served thee well.

1. Don’t use parentheticals when it’s redundant or obvious

It’s a common mistake to use parentheticals in places where the emotion or intent of the dialogue is already obvious (my example above, for instance).

Many actors dislike parentheticals — it’s their job to interpret the emotion, etc. of the scene based on the dialogue provided. So it’s very important to use them sparingly for emotional cues, and only when it would otherwise be unclear…

2. Use parentheticals to avoid confusion

Take the following dialogue, for example:

That’s very different than the following (especially when developing a character):

Similar to Rule #1 (where you’re needlessly directing an actor’s emotions), it’s also a faux pas to overuse them for an actor’s actions.

There must be a way out of here. We have to think.

I can’t come up with anything.

Have you tried opening the door?

Leave the decisions of those minor actions up to the actor. In the example above, all of the parentheticals should be removed.

Note: If your character has a specific quirk, that’s pivotal to your story, you have a bit more leeway in this regard. But even then, you may be better off including such mannerisms in a line of description.

4. Use parentheticals for quick, significant actions

Often times, you can save several lines by slipping quick and significant actions into the dialogue block. And since some execs only read the dialogue blocks of a script to save time, this practice can even provide some much-needed clarity.

Son of a bitch. You got blood on my shirt!

And now my shoe!

5. Parentheticals should never come at the end of a dialogue block

(throws pen at the door)

If the action follows the dialogue, simply pull it out and make it a separate line of description:

He throws his pen at the door. It rebounds. Hits him in the eye.

6. Don’t use parentheticals for the actions of a different character

While one actor is speaking, you can’t describe another actor’s actions.

(Bruno steps to the window)

What are we gonna do, man?

Instead, you would use:

What are we gonna do, man?!

7. Don’t use parentheticals for sounds or camera directions

The WIND HOWLS. Whips at the group’s hair and clothes.

I left out the “steps INTO FRAME” part. Don’t specify camera directions (in your spec script) unless they’re critical to the comprehension of your scene. Leave that up to the director. (See The 5 key differences between spec and shooting scripts)

9. Use correct punctuation in parentheticals

In those rare cases where you need to specify multiple actions in your parenthetical, don’t use periods, dashes or ellipses.

(looks up from clipboard... smiles -- waves them through with gun.)

First of all, that’s a lot to put in the parenthetical. The first two parts, if not all the parts, should probably have been written as scene description. But for purposes of this exercise, semi-colons are the answer…

(looks up from clipboard; smiles; waves them through with gun)

10. Don’t use a pronoun to start the parenthetical

(he winks at Betty)

Instead, you would simply write:

For an expanded investigation of the correct way to use parentheticals, I highly recommend the following Amazon books: