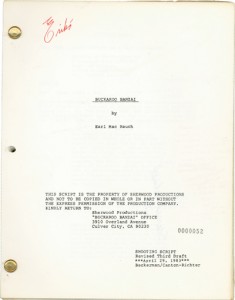 A spec script is a screenplay that’s written “on speculation.” That is, you, the screenwriter, write the script without any development contract or promise of payment in place, in the hopes of getting it optioned, sold, or gaining representation by an agent. It’s how most screenwriters break into the industry.

But the spec script will undergo many changes between the time it’s first optioned or sold, and the time shooting begins for the movie. That leads us to…

A shooting script — a script that has been vetted, changed, rewritten and is now being used as the blueprint for filming the movie. It’s a different animal than the original spec, in a few fundamental ways.

It’s important to know the difference

It’s therefore very important, if you’re a new screenwriter submitting a spec script for review, that you understand the differences between the two formats.

A spec script should have the title of the movie, “written by,” the author or author’s names, and some contact information (for author or agent). WGA notification is optional.

A shooting script may have, in addition to the above, multiple subsequent writers, studio or producer contact information, draft or revision dates, and copyright notices. So stay away from these things in your spec.

If you don’t know how to correctly format your title page (or script), or even if you think you do, I highly recommend this book:

The Hollywood Standard: The Complete and Authoritative Guide to Script Format and Style by Christopher Riley

You never get a second chance to make a first impression.

Spec scripts should not have scene numbers.

So if you’re using them as some sort of cool tool to gauge the length of your script, while writing it, make sure you remove them before submitting your script to anyone.

Spec scripts should avoid any reference to opening credits or title sequences. Screenwriters should just focus on crafting the best opening scene they can. Even if you think your concept for opening titles is wicked brilliant, it may brand you as an amateur if you incorporate such a sequence into your spec1.

Shooting scripts can contain title sequences (or at least reference their location) because at that point, the script is finalized and typically the Director knows how everything is going to play out. The guys that look after the title sequences for films are masters of their craft. They won’t be left floundering if you don’t “leave a spot” for the opening titles in your screenplay.

In spec scripts it’s never a good idea to include camera directions (PAN, DOLLY, TILT UP, ZOOM IN ON, CRANE UP, etc.). It’s the Director’s job to interpret your screenplay and come up with their own shots.

It is okay, however, to craft a scene that implies the camera direction — that directs the mind’s-eye of the reader. Just don’t specify a camera shot in your spec, unless it’s absolutely integral to your vision and pivotal to your movie.

CAMERA TRACKS Bella as she plummets toward the raging ocean.

Bella plummets toward the raging ocean.

The Director will get it, without your telling him how to film it.

Often times the shooting script will not be as well written as the spec script. The very nature of breaking scenes up into specific shots can often compromise the writing quality of the original script. Having already been sold on the movie’s merits, scenes may be written, or rewritten for functionality over form, speed over eloquence. Typos may even sneak in.

But that doesn’t mean that the original spec script wasn’t a flawless work of art. It’s not okay to point to errors or poor writing in shooting scripts and say, “Well, if they did that in their script, I can do it in mine.” No can’t. You still have to sell your screenplay.

Also keep in mind that Screenwriter/Directors sometimes write screenplays for themselves. In these cases they tend to include more camera direction and different language — even in “spec scripts” — than they would normally have used.

Always make your spec script the best it can be. Thank goodness we live in an age where a multitude of scripts are available to us with the click of a mouse, to learn from. Just be wary of picking up bad habits from shooting scripts.

If you can choose between versions of scripts online, take a look at the earlier versions as well. They may be truer to the original spec.