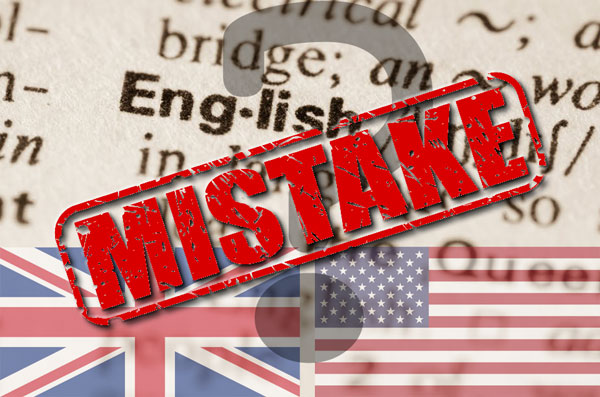 We have to cut the British some slack because their accents are dead sexy and they… well, invented English. But even so, when it comes to breaking into Hollywood — where living too far away from Los Angeles can be an impediment to success — having a tell that you’re actually from another country can spell disaster to your chances of being well received.

It’s one thing if you’re from the U.K. and have written a little indie script that you plan to produce locally. But it’s something else entirely if you’ve written a script that’s set in the U.S. and are going after Hollywood producers. In that case, if you’re a British screenwriter, you need to make sure you don’t give away that you’re living across the pond.

Here are the top 10 technical mistakes I routinely find in scripts written by Brits:

This is an easy one. Make sure you spell words like color and flavor with just the O — not OU (i.e. colour, flavour). Even growing up in Canada, I’ve always hated that damn superfluous letter U. Yep, as a British colony, we got saddled with those spellings.

Same goes for words like centre and theatre. Spell them: center and theater… unless you’re referring to an actual establishment name that uses that particular spelling.

In ‘Merica, we spell it MOM. We actually pronounce it that way too.

Also worth noting… When you hear a Brit call the queen or some other noble “Mum,” it’s actually spelled “Ma’am.” They just pronounce it “mum.” That’s a quick tip for those Americans who have actually stuck with this article till this point.

Here in the States, we just call them baby carriages. I’m not sure most Americans even know what a pram is.

Ooh, I love this word… but it’s very British. If you’re looking for an equivalent word in Yankee-speak, go with “sketchy.”

Yes, it’s much more efficient the way you guys say it, but in America, we always add an article to the expression.

So instead of “She’s in hospital,” you’d write, “She’s in the hospital.”

In the United States, only British expats refer to an elevator as a lift. Always go with elevator.

Very few people use the word “rubbish” or “waste” in this context, in the States. It’s always a dead giveaway. Use “trash” or “garbage.”

Even using “bin” is a little sketchy. Safer to go with “can” or “container” or “bag” as the case may be. But you can usually skip this last word because colloquially we just say, “I threw it in the trash/garbage.”

3. Periods and Commas Outside of Quotation Marks

I’m not sure I like this about the U.S.A. — well, North America, really… Over here, periods and commas ALWAYS go inside of quotation marks. That includes single quotation marks.

And while we’re on the subject, stop using single quotation marks. You guys go nuts over them. Here, we use them very sparingly and usually only in the context of dialogue within dialogue. So don’t give yourself away by going hog wild with single quotes or punctuating sentences incorrectly.

Obviously, question marks and exclamation points are still context-dependent as to where they should be placed. So at least we still have that in common.

And yes, there are some exceptions to this rule — like if you were writing a password. To put a period inside the last quotation mark would be confusing. In those situations, you need to do some razzle dazzle.

If you’re writing an action line, just make sure the password is the last word in the paragraph and leave off the period, like:

There’s a whole suite of car-related terms that give you Brits away. If you’re trying to pass as an American:

This is without a doubt the number one mistake I see British screenwriters make! As you probably already know, as a general rule, all action lines should be written in the more active tense (e.g. “runs” instead of “is running”).

Same goes for “sat.” You’ll say, “She’s sat in a booth.” Just say, “She sits in a booth.” It’s more efficient, and most importantly, it won’t tip your hand to your foreign status or origin.

I feel your pain though; coming down here from western Canada, I used the term “washroom.” No one had any idea what I was talking about. I’m still scarred by a gas station cashier who laughed me out of the store.

Do you have any terms you’re unsure about? Let me know! Of course, I’ll fix these things for you when I proofread your script. It’s all part of the service.