INT. and EXT. Sure You’re Using Them Correctly? 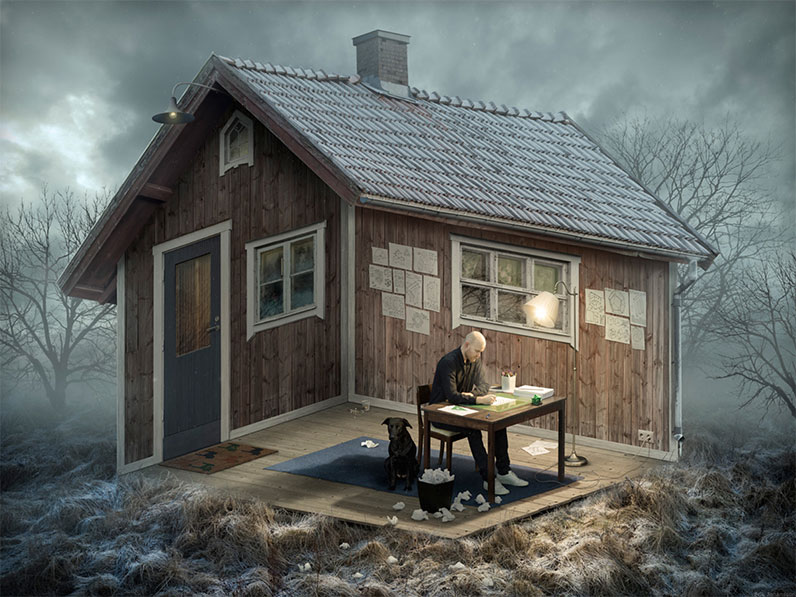 This one’s easy, right? Not so fast.

But what happens when you want the subject matter to be inside (e.g. a family eating dinner), but you want to suggest a shot from outside the house (e.g. watching the family through their kitchen window)? Is that INT. or EXT.?

Or what if you wanted to show that someone is inside (e.g. a third-floor apartment), and they’re spying on someone outside (e.g. on the street below)? Is that INT. or EXT.?

Or how about this one: Suppose you wanted to show a truck driving along a highway and indicate we’re also seeing shots that are inside the vehicle. Would this scene heading be okay? INT./EXT. HIGHWAY – DAY

Brace yourselves, this tip may be a revelation.

Boom! Did that just hurt your brain (in a good way)?

So in our first example with the family eating dinner while someone watches from outside, the scene heading would be:

NOTE: Don’t believe it when people say you should never write: “we watch” or “we see.” It’s great as a general rule (i.e. everything on screen is something we see, so it’s usually redundant), but sometimes it’s unavoidable without a great deal of awkward writing gymnastics. And screenwriting is all about efficiency and clarity.

Let’s look at our second example.

See how I’ve broken the above action lines into two paragraphs. That’s because one paragraph should equate to one shot.

I do hate using the less active verb tense though (i.e. “loping” vs. “lope”), even though it’s an acceptable use because it continues the preceding sentence. So I’d probably rewrite things as follows:

And now for the final example.

We would NOT write: INT./EXT. HIGHWAY – DAY. How can you be inside a highway? Instead write something like:

Save the fact that they’re on a highway, or wherever, for the action lines:

NOTE: Even if you don’t plan on showing anything outside of the truck, it’s always a good idea to use INT./EXT. versus just INT. for driving scenes. Remember, you’re suggesting where the camera is. It’s entirely possible the director would like a shot of the characters through the windshield, for example, which means the camera would be outside of the truck.

There’s one other scenario that trips up a lot of writers. What happens if you’re inside a building but outside a character’s apartment, like in a hallway? Would that be INT. or EXT.?

Here’s where semantics get in the way. EXT. doesn’t mean outside of something. It means it’s an exterior shot, as in outdoors.

So you would write such a scene as follows. Let’s revisit Clara:

The above scene heading could also be written as follows:

Does that all make sense, or does your brain now hurt in a bad way? Let me know!