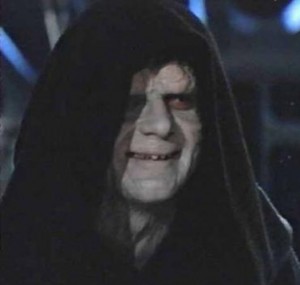 The Evil Emperor -- he's not so bad really. He's just misunderstood. All he wants is to bring peace to the galaxy.

In Respecting The Antagonist: Part 1, I covered the basics of the Antagonist and his function in a screenplay — as discussed in Bill Boyle‘s speech at the Alameda Writer’s Group over the weekend.

In Part 2 today, I’ll be paraphrasing the parts of his speech that dealt with making your Antagonist stronger.

Why do I need a strong Antagonist?

It’s human nature to only do as much as is necessary to reach our objective, especially when our objective is difficult. If someone asks us to turn in a tough written work assignment that must be a minimum of 1,000 words, we’re probably not going to write something that’s 20,000 words long.

The reward is that moviegoers embrace these types of Protagonists — the ones who have to make difficult choices and dig deep down to triumph.

How do I make my Antagonist believable?

How many times have we seen movies where the Antagonist is nothing more than a villainous mustache-twirling stereotype? These movies leave us feeling bored, ripped-off or indifferent. It’s therefore of paramount importance that screenwriters ensure their Antagonist is authentic and believable.

Ensure your Antagonist is as well-rounded as your Protagonist

Embrace your Shadow Side

All of the vices, peculiarities and evils of the world exist buried deep within all of us. Our morality keeps these latent traits in check. But our morality can change at any time, given the right circumstance. There’s a sliding scale.

Here was a hypothetical scenario that Bill gave the group that demonstrates this sliding moral scale. Ask yourself at what point you would back away:

– You’re on a beach and you see a man in the water drowning. Do you save him?

– What if that man is a criminal? Do you save him?

– What if that man is a convicted murderer? Do you save him?

– What if that man is a child killer? Do you save him?

– What if that man killed your child? Do you save him?

We each have a sliding scale of morality, that can change given the right circumstance or knowledge.

If your antagonist is a true villain, you need to embrace your Shadow Side. Where you draw the line may just be different from where your Antagonist draws the line. You don’t have to agree with your Antagonist, but you must understand and respect your Antagonist’s point of view.

Explore that gray area between right and wrong. There’s always a grain of validity to an authentic Antagonist’s cause. Even the Devil can make a compelling argument:

Give your Antagonist some humanity

The best Antagonists aren’t all bad. They have at least a vestige of humanity left. Even the Evil Emperor from the Star Wars universe (he’s got “evil” in his character’s name for crying out loud!) wouldn’t have been able to pull off the kindly Senator Palpatine ruse, if that part of him didn’t exist somewhere deep down beneath the gristle.

Bill offered a few reasons why well-written Antagonists can be so compelling:

Make sure you respect your Antagonist, and I’ll look forward to seeing him on the silver screen!