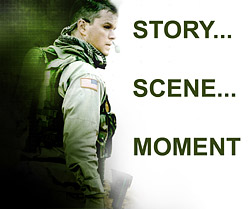 I was watching some deleted scenes for Green Zone the other day, when Matt Damon mentioned the principle of “Story, Scene, Moment” — when deciding which scenes to cut.

The comment was in reference to editing theory, but I thought it was equally applicable to screenwriting, and I had never heard it expressed so succinctly.

The theory is simple:

For example, one of the deleted scenes in Green Zone features a surprise car bombing that kills some Iraqi officials. It was an expensive and well executed scene, but in the context of the narrative it didn’t work. It muddied the story being told — which was one about the search for WMDs, not civil unrest in Iraq.

It was a great moment and a great scene, but it didn’t support the story, so it had to go.

Story, Scene, Moment — I think it’s a terrific hierarchy to keep in mind, during all phases of writing your script, especially when determining which of your darlings to kill. What do you think?