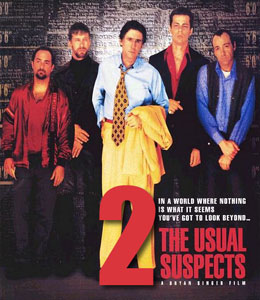 A while ago, I posted an article discussing the protagonist of The Usual Suspects. In the comments section, a “couple of people” had written about a sequel script that was “leaked from CAA.” So I became curious.

As suspected, both comments were written by the same individual trying to promote his own unofficial script. Can’t blame a guy for trying, but it reminded me of all the times I’d heard from amateurs who’d written a script based on someone else’s material (without permission), who were actually hoping to sell it.

Anyway, the author of The Usual Suspects 2: Bear Trap (who goes by the pseudonym: “Blink”) had a special kind of moxie, so I decided to contact him. He turned out to be a good sport, who fully admits that he never expected anything to come of his script, and that it was mostly written for fun.

However… Here’s where it gets interesting

He claims that his script, as a writing sample, landed him a six figure step deal to write another script!

BOOM! (That’s the sound of my head exploding!)

Yup, according to Blink, his unorthodox approach landed him a professional writing gig.

Now, of course, I can’t confirm there’s an actual deal in place. And the pseudonym doesn’t help. He claims the pseudonym is being used out of fear of being sued for using characters he doesn’t own. Personally I don’t think he needs to worry on that front. As long as he doesn’t try to sell the script, it’s just fan fiction. I think he’s probably more concerned about the spurious claims of his script being “leaked from CAA.”

But if it’s true, congratulations! It was a bold ploy (or a whimsical pursuit) that seems to have paid off big.

I don’t recommend anyone else follow his lead though, as you’re much better off focusing your efforts on an original feature film spec. If you knock it out of the park, chances are you’ll sell or option it — AND find yourself in contention for writing assignments.

Regardless, Blink seems pretty open about his script and marketing efforts. He even agreed to let me publicly critique the first few pages. I thought it could be a very worthwhile exercise to show screenwriters what runs through the twisted minds of script readers (or at least mine) while they’re reading your  script.

I’ve included images of each page, so you can play along…

Remember, these are all things that I’m thinking in my head, and wouldn’t necessarily cite in my official script notes.

Yes indeed — the mental critique starts on the Cover Page! First impressions can often be quite revealing. 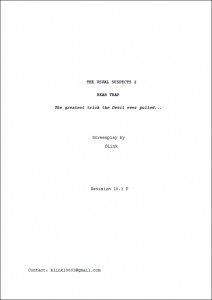 Cover Page
(Click image to open/enlarge in a new window)

After the cover page, we’re already inside threat level 2. Let’s see how the first page goes…

Page 1
(Click image to open/enlarge in a new window)

Okay, let’s see where we’re at after page one in my mental and completely subjective assessment:

Uh oh. It’s creepin’ up (and so is the length of this post)! I think that’s enough for today. I’ll look at a couple more pages in the next post.

In the meantime, if you’d like to take a peek at Blink’s unauthorized sequel script in its entirety, you can find it here: The Usual Suspects 2: Bear Trap (302 KB PDF)

Do you find this kind of critique helpful? Let me know.