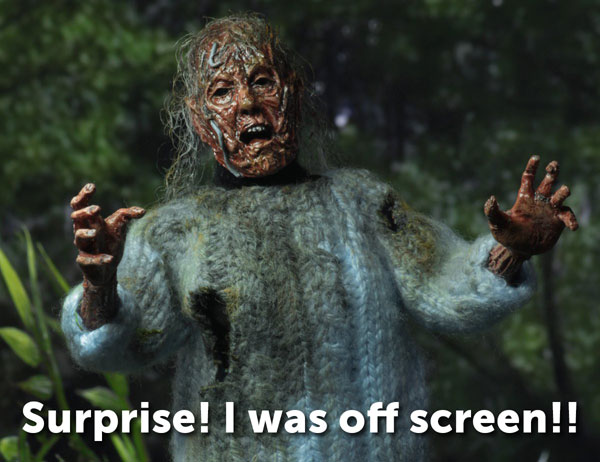 For some reason, the different initials that can appear after dialogue cues trip up a lot of screenwriters. Let’s have a look at what each one means and when the appropriate time is to use them.

O.S. is used when a character is speaking off screen. Simply put, that means the character is physically at the location in question, but the audience cannot see them on screen at the time they’re speaking.

That means one of two things:

O.C., or off camera, is used in exactly the same way that O.S. is used in the first method I outlined above. The character speaking is physically at the location, but we (the audience) don’t see them in the particular shot used at the time.

So which method do you use? Well, it’s really up to you.

Some writers use O.C. for the first method shown above and use O.S. for the second method shown above. That way there’s never any confusion about where the character is who’s speaking (i.e. visible to characters at the location vs. obscured by a wall, door, boulder, etc.).

However, O.C. is also considered a little bit old fashioned. On top of that, whenever you invoke the term “camera” — even if it’s just in an initial — you’re drawing the reader’s attention to the fact that a production is taking place. There’s a camera and a camera operator and a director, etc. It has the potential to break the fictive spell (the illusion of reality in the reader’s mind).

But that’s really just a quibble. Literally no experienced reader is going to balk at your script because you used O.C. So feel free to use whichever method you prefer.

V.O. is used in situations where the character speaking is not physically at the current scene location. So V.O., or voice over, is used for all telephone conversations, walkie-talkie conversations, radio dispatchers, narrators, television news conversations (if you don’t show us the T.V.), etc.

V.O. can also be used like PRE-LAP — at the end of scene — for a conversation that we hear starting before we switch over to the next scene and see the person actually speaking.

Do NOT use O.S. for phone conversations! I see this far too often in the scripts I read.

A few years back, a client sent me an official Oscars-created document offered as a helpful guide to those writers who were submitting to the Nicholl Screenwriting Fellowship competition. The document suggested that O.S. should be used for phone conversations. It literally blew my mind, but it also helped to explain how the misuse of O.S. has propagated so much over time. Always use V.O.

Fortunately, the Oscars have since updated this document and fixed their mistake. However, there are still a bunch of other highly non-standard things in the document, so I’m not going to link to it. Hopefully, they’ll get around to fixing those soon, as well.